Sometimes user message me and all I receive is an email with couple of encrypted files. Not sure if it was a message from user or any screenshot they tried to send over the app.
Please assist here! 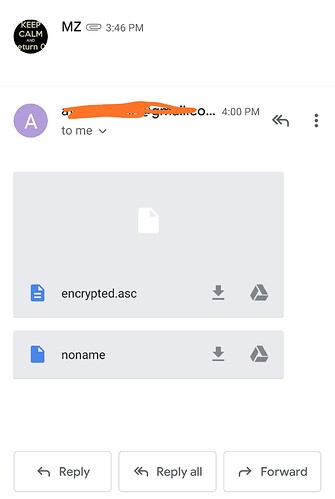 So you don’t get the message in DeltaChat, but you still see it in your email account.
I assume you are on android.
Is the problem that deltachat isn’t running in the background, because your system kills it?

Yes I’m on android but I don’t think system is killing app in background as I checked a few times if there’s any message in app when that encrypted file email showed up in email inbox.

Maybe mark the encrypted email as unread and then restart your phone and open DeltaChat.

Oh k. Wouldn’t it be great if messages between delta apps commute directly without showing up in inbox ? Or is that not possible by any means?

DeltaChat can only move the messages in the deltachat folder when it is running.

If you don’t want any messages in you inbox even when deltachat is not always active, you need to create a filter rule on gmail that moves the messages. https://support.google.com/mail/answer/6579?hl=en

The filter needs to say:
If Chat-Version header exists move the email to the DeltaChat folder.

(I don’t know the exact steps as I don’t use gmail, it could be that gmail doesn’t support filtering emails based on headers in that case you would need to use another email provider if you absolutely need that behaviour)

Is there a chance to find out if the message has been encrypted in conjunction with a public key of the recipient?

I have been referring to the non-readable attachment named “encrypted.asc”. The sender probably does not use Delta Chat, and if the mail received is encrypted with the public key of the recipient, I believe it cannot be read, at least not with Delta Chat.

Sender is using delta chat actually, on his linux desktop. I was also wondering how could such file be opened if this happens in future? A workaround may be…

Do you think that it depends on a file attachment that is included in the message?

No, why should it?

Purely speculating. The file “encrypted.asc” combined with the “noname” content look like a message that consists of one encrypted image only.

I was also wondering how could such file be opened if this happens in future?

use thunderbird with the autocrypt plugin or another autocrypt compatible email client https://autocrypt.org/dev-status.html

@gerryfrancis I think we don’t communicate efficiently right now, because I still don’t know what you want to say.

If it is not encrypted via autocrypt standard it can’t be decrypted by deltachat.

Do you think that it depends on a file attachment that is included in the message?

what is it in this context?

The file “encrypted.asc” combined with the “noname” content look like a message that consists of one encrypted image only.

If it is not encrypted via autocrypt standard it can’t be decrypted by deltachat.

That is exactly what I meant, but that was before I have been informed that the sender in fact does use Delta Chat.

what is it in this context?

The problem itself, the visual appearance of the file attachment “encrypted.asc”.

Maybe I do not understand this right, I have had the impresssion that this is an encrypted content that cannot be read (decrypted), otherwise it would have been shown to the recipient, right?

The first post of this thread includes a screenshot, and I was focusing on the two elements “encrypted.asc” and “noname”, which I interpreted to be likely unusual, I have never seen this before. Now I assume that it probably has something to do with Autocrypt introduction. Anyway, you are the expert, all good.

otherwise it would have been shown to the recipient, right?

Thank you, I am an idiot, I thought it was a screenshot of Delta Chat, not Gmail!!