I’m bringing up the feature request mentioned before:

Hi, Sometimes a post (especially when written with auto correction) is sent, bu…t you are not happy with the contents (due to automatically replaced words which changes the meaning or the blackout you had a moment before ;-) ). If I can select the send post in the chat view and simply sent it again with an additional payload (like a command) that will trigger a delta chat core service on the target side to delete the original post and the resend message from chat and target mail box, I might be happier (or less ashamed). That does not work if the post is already read or sent to a contact which does not use delta chat. Beside the described use case, that feature is announced as new killer feature of whatsApp and will be so part of comparisons with delta chat in future. I don't think that is a essential feature, but something nice and I think I would use sometimes. Nevertheless, I would like to start a discussion here whether it is worth to implement, because it cannot be ensured that is is deleted before it is read. How to implement it (with a time limit or not) and whether we should copy features from other messengers or not.

Yes I know it’s not a guarantee, I know one could just take a screenshot of the messages, and neither does Telegram avoid that. However they are very handy features to correct typos, avoid embarrassment, cleanup conversations and so on.

Even Signal already had the ability to delete sent messages for everyone.

Just make it work like self disappearing messages, but existing messages are deleted/modified on receiving remote requests.

There should be a GUI toggle to disable remote deletion/modification functionality per chat basis, and upon disabling, No one should be able to retract/edit sent message.

The toggle needs a cooldown mechanism to avoid toggling on for a brief moment to edit then toggle off. Make it require a Accepted response from recipe in order to switch the toggle. This is not a guarantee again, but it’s to make sure at least official Delta Chat client doesn’t have major design flaws in regards to the functionality.

Yes I know it’s not a guarantee, I know one could just take a screenshot of the messages, and neither does Telegram avoid that.

Also there is the question how to show that in email with people that use normal email clients.

I agree editing to correct typos is useful (I do it all the time in telegram, discord and even on this forum) but I imagine recieving the same message edited five times in email looks weird to users which don’t use DeltaChat 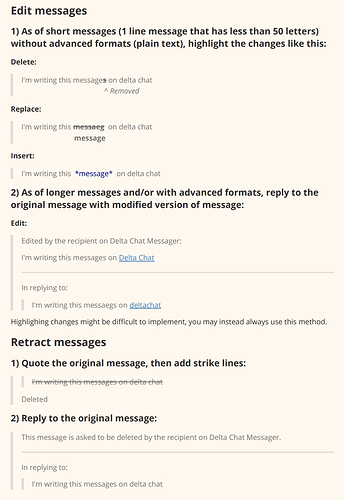 Some thoughts on this